It's time for me to find new home for my fancy chickens.  The farm is a nice place to visit but I don't want my chickens living there anymore.  They are fancy chickens, feather-footed, all friendly, beautiful and very well behaved.
Email me if you're in the Bay area and have a really good home for a few Silkies and/or Cochins.
Dana P., a friend in the pigment business, made these Kraslice for her Easter celebration.  She insists she is not an artist but we know better.  Lovely! 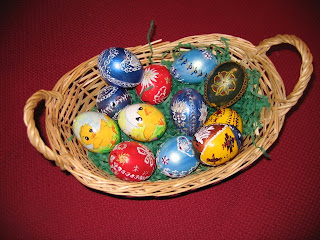 Posted by Hylla Evans No comments:

Camille Przewodek has thousands of loyal followers.  She's a fabulous plein air painter and excellent teacher of colorist methods.  Here is a recent painting she did on location just steps away from where my chickens live at Green String Farm, Petaluma, CA. 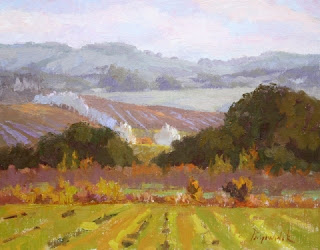 In her recent newsletter Camille shows a step-by-step of this painting.  You can access it via her website, Przewodek.

If you paint in oils, Camille has developed a tremendous tool and an excellent dvd: 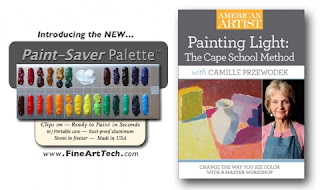 Info on the Paint-Saver Palette is available at FineArtTech.  I'm loving that the design is perfect and it's adaptable to encaustic painting, too!
Posted by Hylla Evans No comments:

With no time to do a full oil painting, it was important to capture the day with a pencil sketch and color notes.  To unify the painting, I worked with only four colors: Avignon Orange (Maimeri Puro), Brilliant Rose (Old Holland), Azure Hue (LeFranc), and Sulfur Yellow (LeFranc).
Here are the basic colors with tints (lead white).

Each is paired above with its complement and shows the neutral mix of those complements.  Equal proportions were used in the above but obviously a great range is possible especially in the pair on the left.
Next picture shows the two warm colors when mixed together.

The center mix (equal amounts) is a primary red with complex tones, far more interesting and appealing than using a straight primary.  If you aren't familiar with Maimeri's Avignon Orange, you're missing a spectacular transparent burnt orange made from quinacridone pigment.
In the landscape scene I was painting, there were hardly any reds.  So why choose a limited palette with two reds but only one blue and one off-yellow?  Well, I'm using the reds mostly to neutralize the greens.  I want subtle nuances that can represent the shift in light from morning to late afternoon.
Below is my color chart of three times during the day. Not shown but possible is a lighter, brighter yellow, a simple tint of Sulfur Yellow and white.

As you can see, the November morning is foggy in Petaluma. By noon the sky's blue and colors are more chromatic. At 4pm there's terrific clarity of lights and darks but the sun is low enough that there's no glare.
My head-scratching question is this.  To what extent do I need the pencil sketch?  I'm empowered more by the color charting as a map for the final painting.  After all, it isn't the shape or juxtaposition of the hills that moves me; it's the colors next to each other.
The challenge to myself: come up with compositions that show the interaction of the mixed colors without representative shapes.
Posted by Hylla Evans 4 comments: 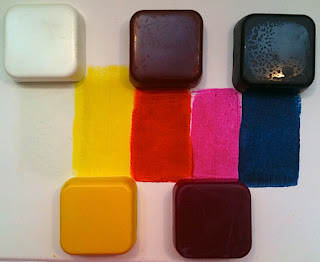 After much experimenting, I'm delighted to meet the needs of artists and teachers with this affordable new
ULTIMATE MIXING SET
Titanium White
Hansa Yellow
Joanne Loves This Red!
Studio Pink
Irgazine Blue
Each color is ready to use, transparent (except for the white), and makes glorious mixes chromatically strong or earthy and subtle.  Blocks average 50ml each.
Available now!
Posted by Hylla Evans No comments:

Excellent surgery day.  All that's left is healing and the eye patch probably comes off Monday.  Bubble did GREAT! 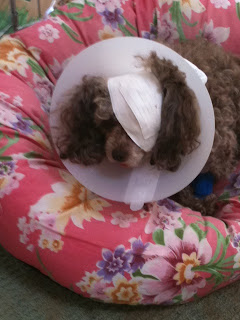 This is Bubble, my 6 year old chocolate poodle, and Saffron, my 7 year old apricot poodle. They're named after two characters from Absolutely Fabulous and they are... absolutely fabulous. It was taken a couple weeks ago. 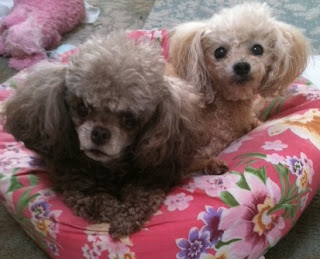 Yesterday Bubble's left eye was suddenly cloudy, milky blueish white.  After online research about cataracts and possible treatment, I decided that surgery was not an option for a small dog because of the risk with anesthesia.
Today Bubble met a lovely animal eye doctor, gave blood for tests with total calm, and was her normal kissy self.  It wasn't a cataract.  It was glaucoma and the floodgates had opened, clearly building internally over time but Bubble never told me she had pain. She is irreversibly blind in that eye. The eye pain is a whopper. In the morning, on this Rosh Hashana, Bubble will go back to the doctor and have her left eye removed.  The anesthesiologist has never lost a patient.  Bubble's eyesight in the left eye can never come back but the pain will be there as long as the eye is there.  So the cure means getting rid of the pain and leaving Bubble whole.  Whole but without that eye.  She will look just as she does above but like her tiny brown eyelid is closed on that side, barely noticeable on her teensy face.
I'm told that after the surgery dogs are shockingly like puppies again, full of energy that pain had pushed away.  Looking forward to a new year and great healthy outcomes for everyone! 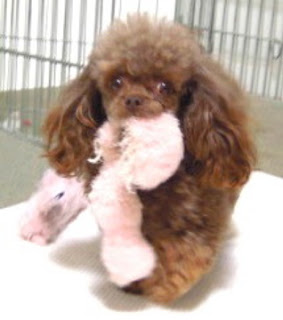 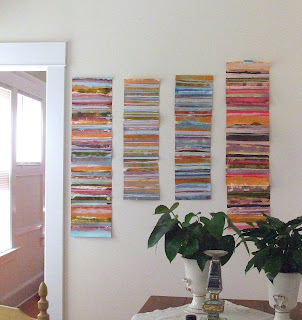 Yesterday was the last day of a three week artist residency sponsored by Evans Encaustics.  One artist used my big studio and five HotBoxes, multiple griddles, lots of supplies to create a large body of work.
This year Marci Borland delved into the heady, thoughtful aspects of her Chants series, some of which will certainly appear on her website this fall.  Because the studio is at Green String Farm, there were hundreds of acres of walking, tasting fresh organic produce, and finding helping hands from the farm for heavy lifting. 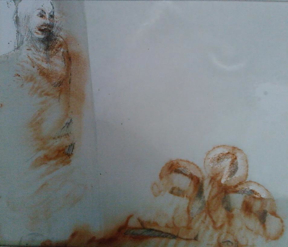 Even in a work session, there are necessary moments of escape and play.  I made a mess with a Paint Stick to test it and Marci added some drawing... all in fun.
Posted by Hylla Evans No comments: